One of the things I enjoy being a musicpreneur is the constant need to sharpen your skills in applications such as Photoshop and Illustrator.

My friends from our “artists collective” in Greece, Modern Mental Rebels, asked me to make them a poster for their upcoming gig later this month… and this is what I’ve come up with:

Not bad for someone who’s not a designer eh?

Designing this poster took me about three days thinking about it and three hours of working on it, mostly on Adobe Illustrator. Most of the actual work was devoted to recreating the logo of the club hosting the event (I was only provided with a link to a website, lol) and trying to neatly arrange the sponsors’ and bands’ logos.

If you feel that I have some natural talent for such work and that you can’t reach that level on your own, bear in mind that it took me years of trial and error until I finally understood what worked as a poster design, and what didn’t. Don’t believe me? Well, here’s one I made earlier (six years ago):

If you are not already rolling on the floor laughing at the picture above… well; the reason it’s bad is that it doesn’t have focus.

It’s just a colourful orange-ish poster with lots of text on it that no-one will actually read. It’s not just a mediocre (at best) poster, it’s also bad publicity. Whether they know it or not, people who see such a design will form the impression that it is an amateur effort advertising an equally amateur band with probably questionable taste.

However, do not let this be a reason for you to stop trying.

Conclusion; If you are serious about your band, hiring a professional designer to draw you a poster is the way to go. If you lack the budget like I did back then it doesn’t matter how bad you are when you start. If you stick to it you’ll eventually become good enough 🙂

ps. Thanks to Mandi Millen, editorial manager at GAC for correcting my grammar and syntax mistakes above. 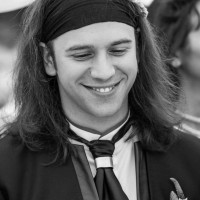 More than the lead vocalist of rock band Schooldrivers, Kay Darens is an active musicpreneur believing firmly that business can co-exist with art.Drawing on more than 500 live performances in six countries (Greece, Netherlands, UK, Germany, Italy & Turkey), Kay has worked with many talented individuals, both on and off stage with various roles such as:• Artist Relations Manager for Sonder Festival (Manchester, UK). • World Finals Event Coordinator, National Director & Artist Relations Manager for The Global Battle Of The Bands (Athens, Berlin, Oslo). • Project Coordinator for festivals Modern Mental Rebellion, Live For Life (23 Bands In A Single Night). • Manager & Music Consultant for Coretheband (Greece).Kay also has:• Given a record performance with Schooldrivers in front of an audience of 120.000 people, during Zeytinli Rock Festival in Turkey. • Starred on 21 episodes of MTV Greece's first ever rockumentary series; The Band Project, with his band Schooldrivers. • Launched, coordinated and promoted one of the few Greek crowdfunding successes for releasing his band's album on vinyl. • Cited as a case study in musicpreneurship in the leading international music ecosystem business event MIDEM (Marché International du Disque et de l'Edition Musicale).Kay actively seeks out like-minded people around the world willing to take their career one step further - living through music and not just surviving it - following a sustainable plan and setting specific goals that lead to personal growth and artistic development.

Are You An Artist? Stop Wasting Your Time.

So Who Are You?